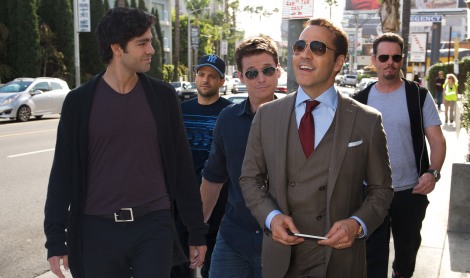 The boys are back and it’s like they never left. The enduring bromance between Vincent Chase (Adrian Grenier) and his entourage, Eric (Kevin Connolly), Drama (Kevin Dillon) and Turtle (Jerry Ferrara) is now living large on the big screen.

Entourage series creator and the film’s writer/director, Doug Ellin, knows how to give fans what they want – fast cars, hot girls, angry Ari Gold (Jeremy Piven) and more cameos than viewers will keep up with. Blink and you’ll miss a lot of them.

The appeal of the television series was that it was inspired from real Hollywood escapades and viewers could live the celeb lifestyle vicariously through the boys. Entourage the movie feels like a two-hour episode – a do-over for the somewhat disappointing series finale, where the characters begin with a fresh slate so loose ends can be left neater than they were at the end of season eight.

There are plenty of laughs, in-jokes and elements from the series to make Entourage an enjoyable flick for fans

Vince makes a risky career move and gets in trouble over a girl, Sloan and Eric have a rocky relationship, Turtle punches above his weight, Drama struggles for fame, and Ari is off his meds. Sound familiar? It’s the formula for the TV show’s success but unfortunately it feels like everyone is wasted in their roles, watered-down versions who have to share their spotlight with the endless cameos and party girls. Even angry Ari isn’t all that angry. It’s a shame because over-the-top and exaggerated is what fans love.

There are plenty of laughs, in-jokes and elements from the series to make Entourage an enjoyable flick for fans, including a revamped opening title sequence with that trademark theme tune. Oh yeah!